75 Years and Growing - The Dodge Family

In order to celebrate Camp Talooli's 75th Anniversary, we will be writing a series of blog posts this year recognizing some of the incredible people that have contributed to our history. We are honored to share their stories with you.

"It seems that Camp Talooli always got what it needed because the right people stepped up to do the right things at the right time."   - Sue Dodge 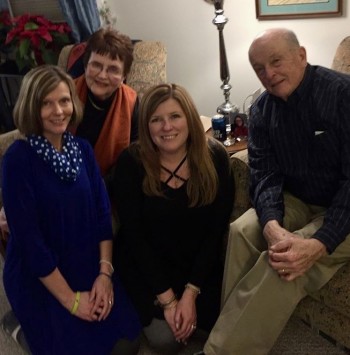 True to the above quote, our series begins with honoring the Dodge Family, who have been intimately involved with our organization since the 1970s. Ever since they first got involved, Sue and Bob Dodge have recognized the importance of giving their time, talent, and treasure to a community they cherished. Their commitment stems from a deeply-held belief in the development of the whole child and the power of learning in the outdoors. The Dodges have formed the backbone of our organization for over 40 years, providing strength, guidance, and continuity through both difficult and celebratory times. 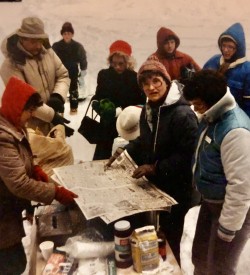 Sue leading a Winter Fun Day at Camp in the 1980's

attending Camp Aloha in Buffalo, New York. Remembering the positive impact from her youth, Sue reconnected with Camp Fire when she became a mother herself. She wanted her daughters to benefit from an empowering youth organization as she herself had. Sue and her family got involved locally with Camp Fire CNY and Camp Talooli after relocating to Baldwinsville. At that time, she recognized that benefiting from a nonprofit organization such as this would also call for her to step up as a volunteer and give back. In addition to leading a club program, Sue was happy to pitch in with whatever the larger organization needed - everything from mopping floors to assuming administrative responsibilities.

Over the years, Sue has held just about every title you could have: club leader, volunteer administrator, board member, seasonal camp counselor, part time program director, camp director, and ultimately full-time Executive Director. Sue worked for Camp Fire CNY for over 25 years before retiring in 2006. She led our organization through some of the most challenging years in its history. In the early 1990s, many youth organizations were struggling to sustain programs that relied on adult volunteers and many advisors recommended selling the Camp property, which was perceived to be a financial burden. Her strength and insistence on the power of outdoor experiences led us through a time of great growth and change to build 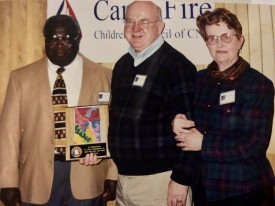 Sue presenting an award at a Camp Fire Annual Meeting

the framework of our current camp model. When asked about what made Camp Talooli  so special and was worth fighting for, Sue explained that it is, “A safe haven for all children, and everyone is viewed as having value.”

One of the most impactful changes Sue made in her time working here was recognizing the need for Talooli to have a consistent Camp Director that worked year-round in order to ensure stability and establish continuity of administration. Sue hired Jan as the Camp Director in 1984, and together they led the way for huge growth in our summer program. In the early 1980’s Camp operated 3 weeks of day camp and 2 weeks of resident camp in the summer. By the time Sue retired in 2006, we were operating 7 full weeks of day camp and 6 weeks of resident, in addition to new programs during the school breaks. 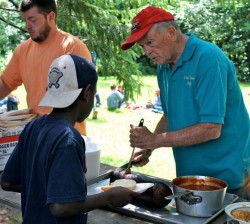 When Bob retired, he began volunteering at summer camp in roles such as fishing guide, bus driver to the horse barn, and camp cook. For many years now, he has been volunteering in the kitchen two days a week and is lovingly referred to as “Breakfast Bob.” Bob is known and adored by our campers and staff for his pancakes, french toast, and oatmeal. Bob takes special pride in collaborating on the Mega-Dog Secret Sauce each week, and is always prepared with a dry joke about its ingredients during the Mega-Dog parade. He says that one of his favorite things is, “To be out in public and have kids come up to greet me and yell, ‘Breakfast Bob!’" 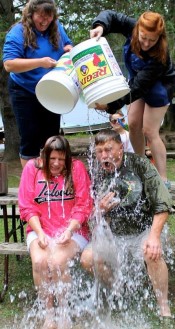 When they were young, Bob and Sue’s daughters were actively involved in Camp Fire clubs, attended camp as campers and worked at Camp in the summertime. They were frequent volunteers at the Camp office when it came time for projects like bulk mailing. As an adult, Rebecca has often provided her time and professional expertise as a nurse when we needed help at Camp. Nurse Rebecca reflected on her experience and explained that there were, “Formative experiences in my youth, particularly the experiences at Camp Talooli and in Camp Fire, that helped me to be the successful leader I am today.”

Over the course of Camp Talooli’s 75-year history, there have been many, many individuals, groups, organizations, businesses, and families that have sustained and brought new life to our organization. We chose to begin this blog series by recognizing the Dodge family because of their long-term and ongoing service to Talooli, as well as their deeply-held belief in our mission to build caring, confident youth, and future leaders. They understand that the key to a successful nonprofit organization is passion and volunteerism. Camp Talooli would not exist today if it were not for the Dodge Family.